One frequently asked question is, “I’ve definitely got fermenting going on; I can see the bubbles rising inside the carboy.  So why isn’t my airlock bubbling?”

Most likely, you’ve got an air leak.  So long as you’ve still got fermentation happening, this isn’t much of a problem.  The CO2 being produced should provide enough positive pressure that you don’t have to worry about oxygen or mold or bacteria getting in.  But, if you’re going to use the same equipment for so-called “secondary” (where there’s usually little to no fermentation going on), make sure it’s sealed better then.

Even with active fermentation, though, you might want your equipment sealed better, so that when that stops you’re not running that risk.  It will also enable the airlock to give you some clue how active the fermentation is.  (Caveat: airlock bubbles do not always mean fermentation, and lack does not mean lack.  Bubbles could be from off-gassing, and apparent lack could be from it just bubbling too slowly for you to notice.)

So how do you seal your container better?  It depends what kind of container you’ve got.

Buckets are great for primary, for reasons I might cover later.  But most of them don’t seal very well.  For snap-on lids, this can often be solved with a gasket inside the lid, where the rim of the bucket fits in.  If you can’t find suitable ready-made gaskets, you can make one by twisting up some plastic-wrap.  You could also try putting duct tape around the lid, securing it better to the bucket.  (Yes, this makes it more of a PITA to get the lid off and back on.)  For screw-on (such as Gamma) lids, I don’t know, but taking a wild guess, maybe some teflon tape on the screw threads might help, just like with plumbing.  If it’s a very loose fit, maybe something thicker, like masking tape.

But what about jug-type carboys, like most of us use for one-gallon batches?  If your carboy has a handle or two, you can use a rubber band to apply a bit of downward pressure on the bung, as in this picture: 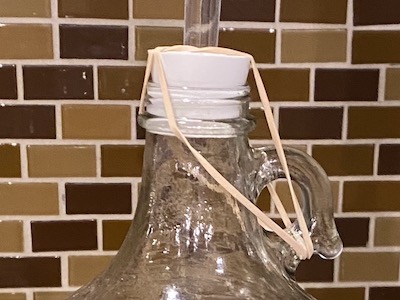 (The rubber band forms an X between the airlock stem and the edge of the bung opposite the handle.  If your carboy has two handles, you’ll find it much easier to arrange it in a way that will balance the forces so it doesn’t tilt the airlock.)

This should give you enough downward pressure on the bung to keep it airtight in the neck — but not so securely that it would increase the risk of bottle bombs (in the event that your must clogs the airlock for whatever reason).

But what if your jug doesn’t have handles, as is fairly common on European “demijohns”, multi-gallon carboys, and large-lidded carboys with bung-holes in them, such as this Fermonster lid? 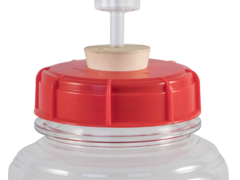 If there’s any kind of rim, such as below this Fermonster’s lid, you can tie a piece of string below that, and attach your rubber band(s) there.  (Depending how much of a rim there is, you may need to tie it very tightly, but leave extra string to form a loop, and attach them to that.)

If you’re using a large or heavy carboy/demijohn, you might have it in a harness or a basket.  If so, you can attach your rubber bands to that.  (Again, possibly with the aid of string.)

If you are using something with a grommeted lid, perhaps the lid and/or the grommet itself is leaking.

There are probably a few more not leaping to my poor little brain.  Eventually I will install a comment system here and you can ask.

So how do I tell if my bucket is leaking?  Push down very gently on the top, and see if that gives you much airlock activity.  Before letting go, keep your pressure on it, and see if the airlock rebalances itself.  If you don’t get any activity when you push, it’s leaking like a sieve!  If you only get a little, it may still be leaky; use your own judgement in comparing the airlock activity to how much you would expect, given how much you flexed the lid; you could try pushing more.  If it rebalances itself with the pressure still on, you’ve definitely got a leak.  If it doesn’t, you probably don’t, at least not a serious one.