Another common beginner question is: “That doesn’t look like water in your airlock, what is it?” 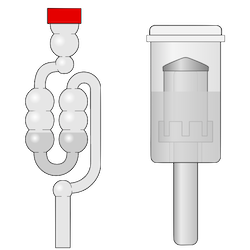 This is because most people start off putting water in their airlocks.  That’s a perfectly reasonable choice — but not the only one.  Even with this approach, there’s the question of what kind of water.  So, the main choices of airlock liquid are:

So what I suggest is the cheapest vodka you can find, from a reputable source (not Uncle Bubba’s ‘shine still!), in reasonable volume — for whatever definition of “reasonable volume” fits your needs and budget.  If you’re just starting out, and not sure you want to continue making mead, maybe a half-pint hip-flask; once you’re doing a new five-gallon batch every week, it might be a gallon.